An Epistle From Brother Phydeaux

The Question of the Day over at Shakesville Monday was,

What comment or critique from a childhood grade-card or document (yes, margin-notes on a high-school essay count) has proven to be completely accurate (or inaccurate) about you?

which made me remember something.

One day senior year, my GT English class was given a group assignment to do some sort of media project for presentation to the class. My group did a film (which was a big deal at the time) of "The Mad Hatter's Tea Party" from Alice in Wonderland. Okay, it was actually a video - on beta tape (remember that?), but wev....

One of the other groups did a "newspaper" from twenty-five years in the future (which, by the way, was last year) that had articles about all of us in the class. David O. was President of the United States [he's actually a VP at Lowe's, but I wouldn't be surprised if he one day ran for office], Stephen M. was a Nobel Laureate in Physics [he teaches physics at a community college], and so on....

According to their paper, I was destined to become a monk, living in a secluded monastery. At the time it kind of pissed me off... mostly because of the whole celibacy thing, but also because they actually thought I would have some kind of religious calling. As regular readers know, I am a PK (preacher's kid), but even then I was agnostic.

But now I see that they were eerily accurate. Except for the religious part... and even there, they were kinda right. I do worship Nature. But I definitely live a secluded life; Teh Interwebs are practically my only conduit to the outside world, other than woodworking/construction... which I am fortunate enough to be able to do mostly on my own. And I am single ( for the last few years by design) and "flying solo", which enforces a type of celibacy.

So, good on you, Wes, Andrew, John, Chuck, and David. You knew me better back then than I did myself. 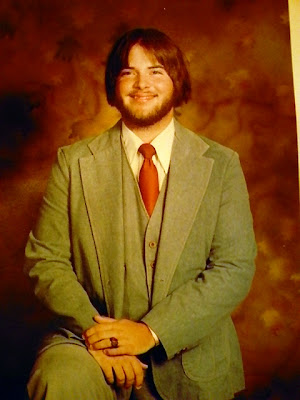 Me, senior year in high school. The beard wasn't quite what it is today, but in my defense, I was only seventeen. I'm wearing a suit my mother made, which was actually blue. I messed up the color trying to "correct" the picture with Picasa. And, yes, that's a clip on tie.
Labels: the man behind the curtain