...You Know Where To Find Me

A year ago today, I typed "If Anybody Needs Me...", clicked PUBLISH POST and got on a plane bound for San José, Costa Rica.

The plane landed a year ago and a couple of minutes.

And Now I Know -- Finally

About 12 years ago, my good friend Micheal burned me a mix CD before moving from Asheville, NC to Albuquerque, NM. It was filled with all sorts of musical goodness, including, of course, a couple of tracks by the Grateful Dead, and ended with a beautiful track that combined percussion, cellos and Navajo chants.

When I listened to that track I was mesmerized. It was so totally different and fantastic. Unfortunately, Michael didn't get the name of the track (he found it online), and ever since then I've been trying -- on and off -- to identify it.

Enter tonight. Jen's sister is here for a visit and has an unidentified CD that we were trying to find out what it was (we haven't been able to yet), and in the course of that attempt, I came across a free program that claims to be able to id songs by the sound. After I tried Lisa's CD, I put in that mix CD and ....

The song is Yehe-Noha, on the album Chants and Dances of Native Americans, by the German artist Claus Zundel, performing under the name "Sacred Spirit". It was apparently a worldwide sensation when it first came out. A couple years ago I uploaded it to a free music hosting site that has since gone out of commission, but there's a sample of the song here.
1 Experiences related Labels: music

Where's My Coonskin Cap When I Need It?

I guess it depends on your age (and where you're from, to an extent) as to which of the following means most to you, but the singer of the first and the one who appears in both videos is Fess Parker -- Davy Crockett or Dan'l Boone, your choice -- and he died today at the age of 85.

Being from NC, and having lived just a few miles from where Daniel Boone lived before moving to Kentucky and opening the Wilderness Road, I'll always identify Parker with "ole Dan'l".

(h/t to PZ Myers, who needs me linking to him like I need to gain a few pounds, but there it is)
0 Experiences related Labels: stupidosity

I Wonder If Any Of Them Were Moving?

Once upon a time, I drove a Volkswagen Beetle (1974 model). It was a dozen years old or so when I bought it, and, as was normal for them, there were little things that would go wrong with it from time to time. A couple of times I literally fixed it with duct tape and/or bailing wire. I loved that car and drove it to death -- when I traded it in for the first of two Suzuki Samurais I owned, I coasted the last 1/2 mile to the dealership with a completely dead engine.

I used to be pretty handy at fixing things on whatever vehicle I owned, up to and including adjusting timing and replacing head gaskets and such.

But not any more. Cars today are run by computers, and the mechanical parts are supplemental to the computers. Which makes this story pretty much inevitable:

In the college town of Austin, Texas, a disgruntled hacker apparently managed to override a remote vehicle-immobilization system called Webtech Plus, effectively shutting down dozens of cars and setting off alarms on dozens more.

I tried to convince some people with money (aka potential investors) that the time was right to bring back the Model T -- well, a comparable but not-quite-the-same vehicle, because I wouldn't be doing it for the Ford Motor Corporation's benefit.

Think about it. A car that gets you to where you're going without all the extra crap that all cars have now. And could be fixed by the owner without a computer hookup. Maybe I should try again.
0 Experiences related Labels: technology

There Is No Pie in This Post, But If There Were It Would Be Green

And other various Gaelic sayings apropos to the day!

Reel Around the Sun (the opening number from Riverdance)

*a thousand welcomes
**the blessings of St. Patrick upon you
***Ireland forever
1 Experiences related Labels: holidays

We done et it all.
1 Experiences related Labels: cooking with Phydeaux

So we shared some of The Pie with the girls for dessert tonight (they were at their dad's last week), and a) they pronounced it The Best Pie Ever (can't really argue with that as it's always been the favorite of all the pies my mom makes, and b) they wanted to know why it's called "Chess Pie" (the chocolate part was self-apparent).

Turns out no one really knows why it's called Chess Pie. There are theories, including the possibility that it's a corruption of Cheese Pie, and that in the South, whence comest this culinary delight, pies used to be stored in a piece of furniture called a "pie safe":

But my favorite theory (which, as a native Southern speaker, makes total sense) is that the name derived from saying it was "just pie" ---> "jes' pie" in the vernacular, and that became chess pie.

Anyway, I also found (whilst searching for the why) this old recipe from Martha Washington's Booke of Cookery

To make very good chee[secakes without] cheese curd
Take a quart of cream, & when it boyles take 14 eggs; If they be very yallow take out 2 or 3 of the youlks; put them into [the] cream when it boyles & keep it with continuall stirring till it be thick like curd. [Then] put into it sugar & currans, of each halfe a pound; ye currans must first be plumpt in faire water; then take a pound of butter & put into the curd a quarter of [that] butter; [then] take a quart of fine flowre, & put [the] resto of [the] butter to it in little bits, with 4 or 5 spoonsfulls of faire water, make [the] paste of it & when it is well mingled beat it on a table & soe roule it out.. Then put [the] curd into [the] paste, first putting therein 2 nutmeggs slyced, a little salt, & a little rosewater; [the] eggs must be well beaten before you put them in; & for [your] paste you may make them up into what fashion you please..."

The Time Has Come, The Walrus Said

In honor of this estimable day, I baked a Chocolate Chess Pie, using my Mom's recipe (which I've uploaded to AllRecipes.com, btw). When it came out of the oven, I got Jen to take a couple pictures (hers is the better camera for indoor close shots): 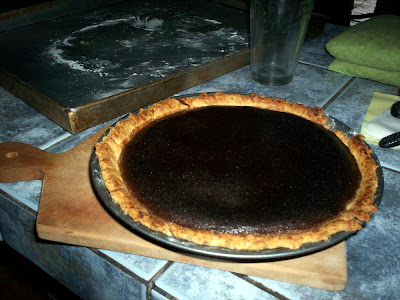 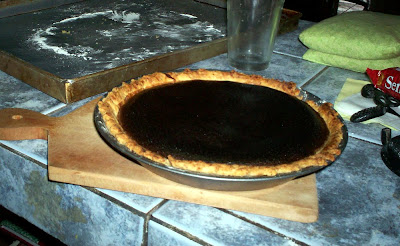 And here's a shot of Raxicoricofallapatorius ("Raxi", for short), in her usual "broken" sleep pose: 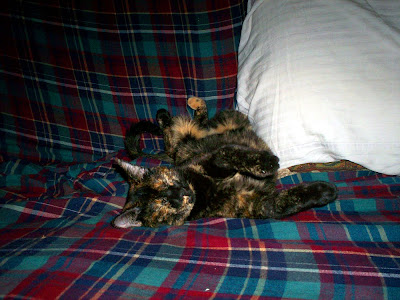 (click on the photos to enlarge them)
8 Experiences related Labels: cooking with Phydeaux, kittehs

Blogging shall resume, my phriends. Never fear. I've been a bit frustrated by the sheer inanity of what's happening up there in the United Corporations States of America lately, but I'm sure the words will start flowin' soon.

Plus I was feeling puny a good bit of the last week, so....
1 Experiences related Labels: bloggy things

This is what I wonder. I wonder if there are any journalists left in the United States, and if there are, WHERE THE HECK ARE THEY? (pardon me for shouting) Allowing blatant lies -- not prevarications or hedges, but blatant, bald-faced lies --to not only pass unquestioned, but to be repeated as Gospel ad nauseam (and it doesn't take much of the regurgitating to ad my nauseam) is as closely related to being a journalist as I am to being a String Physicist (and the closest I get to String Theory is the TV show Big Bang Theory (Bazinga)).

UPDATE: Nicole Belle, over at Crooks and Liars, has posted about Craig Crawford getting fed up with "point of view reporting" and quitting MSNBC. She ends her piece with this:

I do think that collectively we're reaching a form of critical mass on being tired of opinion media masquerading as journalism. There will always be a certain percentage of the population that needs their pre-conceived notions reinforced, but by and large, Americans don't trust "journalists" any more, with reason. And this stand of Crawford's--as contradictory as it appears on its face--may be another crack in the dam.

I agree totally with the ending clause of the penultimate sentence, and hope the dam bursts soon -- but there's no way I'm going to hold my breath.
5 Experiences related Labels: Brains - or the lack thereof

10:50pm local time and that was a strong tremor. It scared Raxi. Her li'l tail is all puffed up. Woke Jen (who's feeling poorly, btw) up, too. A fairly strong jolt and then rattle for about... oh, 3 seconds, I'd say. I'll update this with more info once the seismological sites I know have had time to update.

UPDATE ONE: First data -- from the OVSICORI (Observatorio Vulcanológico y Sismológico de Costa Rica), same place as the info in the last post. See the jolt? 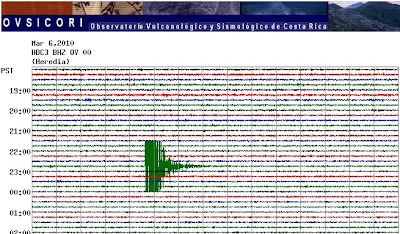