In Remembrance of My Mom

As the title of this page says, herein lie remembrances of my Mom. The first is the memorial blog post I wrote the day she died. Other sections may be added as time goes by. 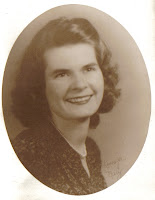 This is the oldest photo, of which I know, of my Mother... from around 1946, possibly a year or two earlier.  She was attending Duke Divinity School, where she met my Dad.  In the lower right, you might (if you click to embiggen) be able to make out the words, "Loves Ya, Mary" that she signed on the picture for my Dad.  Mom was the first woman to graduate from Duke Divinity, and in fact had to push the dean of the school to create a "Women's Program", because back then there just weren't any women ministers.

There is a matching photo of my Dad, and the two were framed and hanging on the wall of their bedroom when I was a kid. 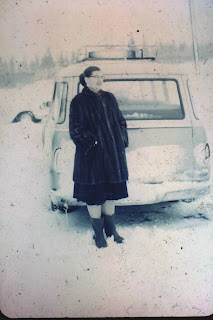 The photo to the right was taken about ten years later, still before I was born, when my family lived in Alaska.  There still weren't any women preachers in the Methodist Church, so Mom was a Preacher's Wife, and mother of four young kids.  Well, in Alaska she was an Administrator's Wife, because the family moved up there for Dad to be Administrator of the Jesse Lee Children's Home, which was then in Seward. 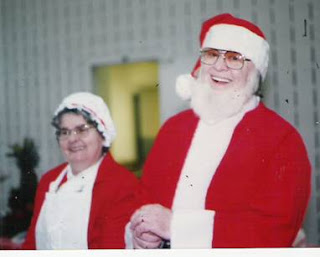 We skip about forty years, to the mid 1990s.  In this photo we see Mom dressed as Mrs. Claus, with my Dad as Ole St. Nick himself.  It was taken the first or second Christmas that my folks spent at the Arbor Acres United Methodist Retirement Community.  (That is Dad's real beard, by the way, and hence the Mr. and Mrs. Claus bit)


In this last photo we have Mom, taken this past Christmas when Jen's parents stopped by for a visit with my folks.  Mom was already in the Special Care Hospice of Arbor Acres, suffering from congestive heart failure. 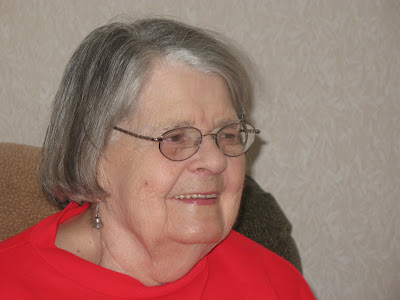 Mom lived a life pledged to service: to the family as mom, to the church as minister's wife and lay leader, to the community as teacher and volunteer. She was a wonderful woman (not that I'm biased) and lived a long, full, happy life, and she told me several years ago that she was looking forward to what came next... and now she knows.


Years and years ago, I asked Mom what her favorite tune was.  She didn't hesitate a bit before telling me it was Finlandia, by Jean Sibelius -- also known as "This is My Song" or "Be Still, My Soul".  I hoped to post either audio or video of the hymn being sung in memory of my dear mother.  But since this is the internet (and because I couldn't find such), I have a video of a group Chinese university students in Hong Kong singing the original words, which can be seen over at Wikipedia -- in, apparently, Finnish (I don't speak either Mandarin or Finnish, but based on the comments at YouTube... well, you get the point).


Here are the words, as written in the Methodist Hymnal, that I know for the tune, and that Mom knew and loved:


This is my song, oh God of all the nations,
A song of peace for lands afar and mine.
This is my home, the country where my heart is;
Here are my hopes, my dreams, my holy shrine;
But other hearts in other lands are beating
With hopes and dreams as true and high as mine

My country's skies are bluer than the ocean,
And sunlight beams on clover leaf and pine.
But other lands have sunlight too and clover,
And skies are everywhere as blue as mine.
This is my song, oh God of all the nations;
A song of peace for their land and for mine.

Loves Ya Mom,
Your Baby Boy

Mary Luke Rutledge, beloved wife and mother, died peacefully at 8:01 pm on Friday, September 3, 2010, at Arbor Acres United Methodist Retirement Home in Winston-Salem, NC.  Her 89 years were a life well lived and a gift to all who knew her.  She was the first woman to be graduated from Duke University Divinity School, where she met her future husband, Tom Rutledge.  They were later married in Duke Chapel and, after graduation, served in various churches or areas of social work in Texas, West Virginia, Tennessee, Alaska and North Carolina.

Mary was preacher’s wife and lay speaker, teacher of Sunday school and high school literature and grammar, master cook, gardener, exuberant wife and mother.  She loved to read, raised prize orchids, tended beautiful perennial and vegetable gardens, baked delicious bread and specialty dishes that have become family heirlooms, had a smile that lit up whatever room she entered.  She lived her entire life like a young child on Christmas morning, and her enthusiasm and love of life endeared her to everyone she met.

The family wishes to express deep gratitude to the nurses, aides and doctors at Arbor Acres Health Care, who gave such loving and tender care in the final weeks and months of Mary’s life and who welcomed each visiting family member as a long-lost friend.

A memorial service for Mary Luke Rutledge will be held on Wednesday,  September 8th, 2010, 11:00 a. m., at Arbor Acres, where she and her husband Tom have lived for the past 16 years.  The service will be held in the Fellowship Hall.

by David Piner, Director of Arbor Acres Retirement Community, Mom's home the last 16 years of her life.  This was presented at Mom's memorial service on 8 September, 2010

I first met Mary Rutledge the day that she and Tom came to visit Arbor Acres to consider making this community their home. I can guarantee that that no one like the Rutledges had ever before crossed the threshold of Arbor Acres, nor has anyone like them crossed it sense. I remember well expressing concern to Tom and Mary that while this is a loving and caring community, those who live counter-culturally may find living here a bit like running a gauntlet. More specifically, and this I recall vividly, I turned to Mary and said “Mrs. Rutledge, I think you’ll be just fine here. It’s the guy on your right I’m worried about”.

Haven’t we all of us come a long way since that first encounter. It is true that Tom and Mary conducted their life among us exactly as they conducted the whole of their shared life, on terms of their own choosing. No demure cane for either of them; rather, when they needed something to stabilize their walking, here came the rough hewn walking sticks, large in scale, and dramatic in appearance like something out of a mountain folk tale. Large in scale, dramatic in appearance, enfleshments of mountain culture, that’s Tom and Mary for you. Gear up the gauntlet if you dare, but from the day they first entered Tom and Mary, living in accordance with scripture, have walked in their integrity.

In her Arbor Acres years, and I suspect long before, Mary proved herself to be the perfect yen to Tom’s yang, the quiet pool alongside Tom’s babbling brook, the still small voice serving as counter point to Tom’s thunder and wind (no offence, Tom, I’m think of refreshing currents of breeze, not hot air). Together they formed a harmonious chord, a shared witness to the virtue of living one’s life as a balanced pair, male and female of a rare species who along with more commonplace and domesticated animals took their place on the Ark of Arbor Acres. Together we have sailed all the floodwaters of life that have risen since, and, as Noah in this particular metaphor, I have remained constantly and profoundly grateful that they came aboard.

Mary’s identity was by no means derivative from Tom’s at times eclipsing presence. She was and remains her own woman. She brought to Arbor Acres her own theology, her own desire to teach and promote the spirituality of others, and her passion for service. So long as she was able she was an active player in the spiritual life of the community, working closely not only with Douglas Suggs our Chaplain in the formation of prayer and study groups, but also willing to take her own programming initiatives. Mary’s gentility and gracious presence served as magnets drawing others to her and inviting them into her active ministry. Charisma, and Mary had charisma, is powerful. Mary was powerful, and while magnetic power may sound sweet and unifying, it is also strong and times fierce. When she deemed it necessary, Mary could be prophetic calling the whole of Arbor Acres to account if she sensed straying. I’m thinking specifically about the turning point when the resident council requested liberalization of policy restricting the use of alcohol in our dining venues. Not the letter writer or speech maker, that was Tom, Mary, like Elijah, was nonetheless a commanding voice opposing what she considered deviation from God’s will, particularly as it is embodied in the United Methodist Discipline. Woe be unto those who dared disregard rules in place to enforce godly living.

Even at such times, however, Mary possessed an unfailing and ever exuberant grace that allowed her to accept and rise above change for the sake of maintaining relationship with those she loved. And reality is that Mary loved everyone. She still does. Her kindness was boundless, angel-like in that it often appeared subtly and at the same time dramatically. One morning we might be walking the hall toward the mailbox area and there on the credenza at the end of the corridor would be one of Mary’s orchids singing to us in full bloom. On another occasion there might appear a Christmas cactus in full flowing, a simple gift of love emerging from the heart of one of Arbor Acre’s quiet angels.

Like the flowers she tended and shared, Mary’s smile was likewise a gift she gave generously. Unlike her flowers, however, Mary’s smile remained always in full bloom singing its sweet angel song above the din of an all too dissonant world. This gift that Mary provided so constantly, in both good and challenging times, in sickness and in health, until death did part us from her, remains to sooth us now. Grandee, that’s Tom in case you happen not to know it, quoted this to us this morning in his daily mediation:


“It's great to be alive, to breathe fresh air, to hear the robins sing and see the rising sun, to be free, to be part of mankind. Life, despite its trials and tribulations, is joyous; but it also is ethereal, evaporating sooner or later, for the faithful, into the heavens.”

Mary loved being alive, breathing fresh air (even your occasional hot air Tom), hearing robins singing and reveling in the gift of sunlight new every morning, joyously taking her place within the colorful spectrum of humanity. Yes, she knew tribulation. She also knew and provided the rest of us a taste of the ethereal nature and profound beauty of life. At the last, she didn’t so much evaporate as surrender to the Master who called to her by name. Such was Mary’s faithful witness day by day, quiet moment by quiet moment, smile by smile, now eternally in the heavens.

What an amazing woman! I would have loved to know her.

My condolences, Bob dear, on your loss.
G