On The Sixth Day of Christmas....

We (and it's we now because Jen has been doing most of the painting) finished [basically] the bunk beds!

Since my last posting, this has happened:

Back on track today, I went to the lumber yard to get some 1x10s for the shelves that will be at the foot of the bed (I had bought 1x6s originally, but we decided that deeper shelves would be better).  I cut and sanded the shelves, then began the assembly:

But I did have help, feline:


Finally, it were done:


Tomorrow, the headboard and, hopefully, some assembly in the bedroom!
1 Experiences related Labels: Bob the Builder

Wherein the Track Gets Sided

Oh, right, I was building bunk beds for the girls for Christmas.

Well, that didn't get done, thanks of a combination of a spell of vertigo on my part and lack of the exact right tools (I needed an auger bit to get the holes drilled properly).  So, on Christmas day, the girls each got a 1x4, and I showed them the drawing of what will be their new beds.  They were/are thrilled. :)

Also, with my new monitor I had to remove the shelf unit on my desk, as it was built to fit around the old, smaller monitor. So today, I decided to build the new shelf unit (because all the stuff I had on the old one is in a box, and, as it's pretty much all stuff I use on a regular basis, I don't like being able to get to it).  And the girls are at their dad's until Saturday, so I've got time.

But first, I decided to [finally] build my workbench, some of the material for which has been in the carport for several months.  Using that and the  cut-offs from the bed lumber, I put together a workable workbench (is there any other kind?).


Ahhh, now I can cut/nail/screw/sand/assemble up at a comfortable height and not on the floor (or on the kitchen counter)!

On to the shelf unit, which I had drawn up on Google Sketchup:


My photographer was busy elsewhere while I was putting it together, so no action shots, but here's the thing, done and in place (varnish still just a bit tacky so I haven't loaded it down yet):


As you can see, although I got sidetracked, I still accomplished a good bit.  Tomorrow, it's back to the bunks.  But now I'll be able to use my new workbench!!
2 Experiences related Labels: Bob the Builder

Following up on yesterday's post, I've now done all the cuts (thanks to Jen's NB1 for the loan of the Skil saw - cutting 4x4s with a handsaw wouldnae been much fun) and now have ....

Next step, drilling all the holes and, as Norm Abram would say it, "assembuly".

Then it's off to the finish room -- oh, wait. This isn't The New Yankee Workshop, and I don't have a finish room. But I will be staining and polyurethaning my li'l brains out this afternoon and in the morning.
2 Experiences related Labels: Bob the Builder

which is also this:

and also too as well this: 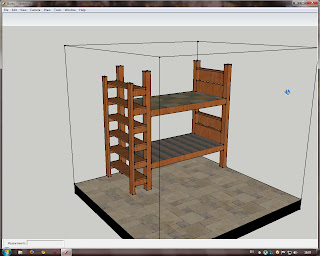