When I was a lad of thirteen, my father, knowing my interest in the subject, bought me a subscription to a new publication, called Isaac Asimov's Science Fiction Magazine. I still remember reading the fist issue, which looked like this: 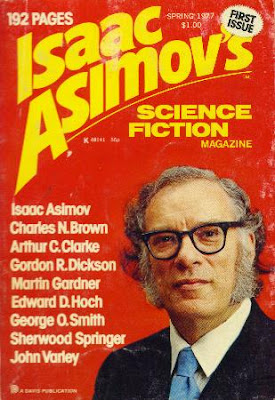 The "Good Doctor", as Asimov was known, was my favorite author, and I loved reading his monthly essays and the occasional pieces of fiction that were included in the mag. I was also enthralled by the fact that the magazine actively sought young, new authors.

Having noticed a certain tendency for short pieces with humor or puns to be accepted for print, I wrote a short story - my first - and decided to submit it. I learned all about format and SASE and all that stuff. I don't recall if I ever did submit the story, because I don't remember being rejected, but it certainly never appeared in the pages of the magazine.

Flash forward over a quarter century to the other day. I was looking through a box full of some of my old school stuff that my Mom had kept for me, and guess what I came across. Yup. And, so, I present to you a product of my teen imagination....

First Contact
by "Phydeaux Speaks"
Anna Lee Gentry stepped off the ship and looked around the spaceport eagerly, her stomach fluttering at the prospect of her first solo assignment. After years of school and even more years of being an Associate Adjudicator, she had finally been deemed ready for the "Big Leagues". Her father, a history professor, had taught her that expression, which was from an old sport called baseball that had once been played on Earth.

The United Planets had been in existence for almost five hundred years, growing from humans only in the Sol System (in the days before Hyperdrive) to span over two hundred and fifty star systems and include over six dozen sentient species.

As a xenologist, Anna Lee spent her early professional years working with some of the masters of "First Contact", and they had always heaped praises on her for her calm, logical mannerisms. What they didn't know was that she lived in constant fear of failure.

Her parents had been disappointed in her decision to enter the Diplomatic Corps. They had hoped she would become a physician, like her mother and grandmother and great-grandmother. But the idea of being in an office and doing the same thing day after day never appealed to the headstrong girl.

Her parents had been overjoyed for her when she received the assignment to go to the newly discovered Arcana System and negotiate with the High Council about joining the UP.

"Lady Gentry?" a voice pulled her attention away from her study of the alien architecture. "I am First Warlock When. Welcome to Arcana." The tall humanoid male in flowing robes bowed to her and she returned the gesture, taking note of the protocols for her initial report back to headquarters.

"If you will come with me, my ground car is waiting to take us to the Arena," the First Warlock continued, gesturing to the waiting vehicle.

Anna Lee stared, fascinated, at the passing buildings and scenery as the car whizzed down the broad roadway. Taking her cue from the silent male, she asked no questions, merely observed. Soon, they arrived at a huge oval shaped building, and, leaving the vehicle, entered through one of the yawning portals. A short walk down a wide and dark tunnel led them to the vast expanse of grass covered floor in a structure that was much like the ancient ruins of the Roman Amphitheater.

Stopping just short of the doorway leading onto the field, the First Warlock spoke for the first time since his greeting at the spaceport, "In order for you to be recognized in Arcanian society, you must take part in a Rejuvenation ceremony. Don't worry," he added upon seeing her concerned expression, "your part is merely ceremonial."

"Of course, First Warlock," she answered, "tell me what I must do."

"Female Arcanians must, every five years, undergo a Rejuvenation, in order to maintain their faculties and abilities. The process is very simple. They simply must absorb the essence of kallah salt. The problem arises that before they can absorb the salt, they must reach a point where their reason and ability become... suspect. It is not safe to approach within a score of meters, due to the fluctuations in the female's energy fields. So," the tall humanoid concluded, "all you must do is throw a measure of the kallah salt and hit the female."

"From twenty meters away?" Anna Lee asked, with fear in her voice. "First Warlock When, I am not trained in athletics. I do not know if I can do this."

"If you refuse," When replied icily, "then you will be asked to leave the planet."

I can't let my first assignment end in failure, Anna Lee thought. "I will try," she said to the Arcanian official.

The First Warlock nodded and then led the nervous woman out onto the field. Anna Lee looked around, nearly forgetting her nervousness, at the immense crowd of Arcanian males that filled the seats of the Arena, all staring silently at three females at the far end of the grassy expanse. The females were howling and thrashing about, held relatively in place by the long chains that were staked to the ground.

The First Warlock's voiced filled the entire Arena, "Gentlemen, Lady Anna Lee Gentry of Earth!" The crowd responded by stamping their feet rhythmically, in what Anna Lee assumed was the Arcanian version of applause. More quietly, When said to her, "You will have one attempt to hit each of the females" and gestured to a youth who presented a tray with three orange sized spheres of glittering salt.

Raising his voice again, When gestured at the first female and said, "Witch Why!"

Anna Lee picked up the first ball of salt, and, shaking, took aim at the gibbering female. The iridescent sphere flew through the air and landed several feet from the target. The Witch howled and fell to the ground, twitching violently. A low murmur began in the stands.

With a stern look on his face, First Warlock When gestured at the second female. "Witch Is!"

Anna Lee wiped her sweaty palm on her tunic and grabbed another ball of the salt. Again, the sphere flew and, again, missed. Witch Is screamed pitifully and collapsed.

In a voice that would have frozen lava, the First Warlock pointed at the third female. "Witch It!" he hissed.

Trying to control her shaking, Anna Lee grasped the final ball of salt and hurled it with all her might. Time seemed to slow down as the sphere arced through the air and, blessedly, hit the gibbering Witch square in the chest.

In a tone of elation, the First Warlock announced, "I pledge Anna Lee, Gents, for Witch It stands!"
Labels: fiction