A quick note to those not associated with the Occupying Regime here in the United States of America:

Please remember, as the bombs and missiles strike targets in Iran, that the vast majority of people in the US - including members of the military[dead link edited - see update below] - view this attack as immoral (not to mention illegal).

I'm afraid the above mentioned scenario is no longer a product of tin-foil hat delusion, but is a nearly unavoidable occurrence. As a nation, however, we are too distracted by the beginning of college and professional football, pennant races in baseball, the latest installment of Big Brother, and whatever other distractions the MSM can come up with, to be bothered to give a shit.

As long as corporate CEO's continue to get nine-figure salaries and cheap, lead filled toys are available at Wal-Mart, and pop singers are walking around with their privates exposed, we are content.

Your suffering - at our hands - and hatred of us do not matter.

We are the "shining city on the hill" - chosen by God, no less - and we can do whatever the fuck we want.

While the turrists may be able to cross the Atlantic and Pacific with impunity, we know that the great oceans protect us from attack by any nation-state (Canada and Mexico are mere puppets, having been lured by the promise of corporate largesse - so we have no need to fear them). 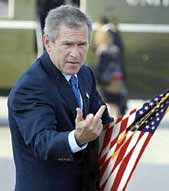 In closing, I'd just like to say how I look forward to forming an escape committee with my fellow inmates at the Blackwater-run Interment Camps that are being set up around the country to deal with us librul malcontents. You can't miss me; I'm over six feet tall, weigh close to 300#, and have a big gray beard.

If I'm not just shot outright, that is.

And my own pre-emptive strike on non-literate writers: it's "Martial Law", not "Marshall Law", you dumb shits.

UPDATE: As Brian from Incertus points out in comments, the DailyKos diary referencing the military has been deleted. A "rebuttal" of said post can be found here.
Labels: I'm puking a little just thinking about it, lies and the lying liars, rant, the dogs of war, the end of america