Cleaning Out Some Of The Cobwebs 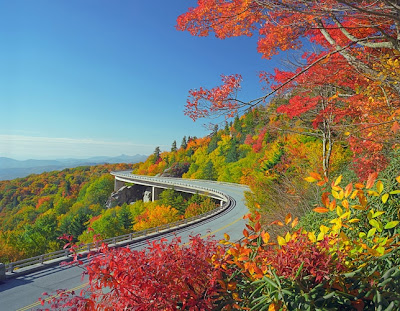 Isn't that photo gorgeous? For those who don't know, that's the Linn Cove Viaduct on the Blue Ridge Parkway. The Viaduct was the last section of the Parkway built, some fifty years after construction of the road began, and was necessary to protect the fragile biosphere of Grandfather Mountain.

Why do I post that picture, you may ask? Well, it's Autumn! Summer is over (according to the calendar, anyway), we have passed the Autumnal Equinox and the Sun is moving south in the sky.

If you are an Eastern US resident and you have plans to head to the Southern Appalachian Mountains (like tens of thousands of people) for the annual color show this year, don't expect anything like what you see in the above picture. It's been too dry this summer (most places) for the colors to be so vivid. Last weekend I went down to Georgia (why does Charlie Daniels come to mind), and, along the highway, leaves were already turning brown - in September... in east-central Georgia!

(Come to think of it, though, Grandfather Mountain may be the only place where the colors show up this fall, it's nearly a rainforest up there, so who knows)

I must send out thanks to a dear online friend, who recently slipped me some bucks via PayPal. The kitties and I both thank you, and wish to say that the food the money purchased is most excellent! 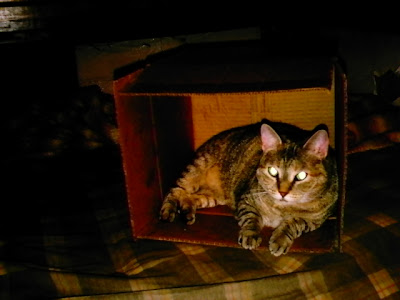 Puff, relaxing in "her" box, after a filling meal

The question this time was a simple "Why?" And the results are...

Can any of you four that voted in the majority explain to me what I meant by that statement? ... Anyone? ... Bueller?

What the hell has Hillary been smoking? Since this was Faux Noise Sunday, I didn't see it (I'd rather be thrown into a pit with a dozen hungry tigers), and the clip at Huffington Post is rather short, and I have noticed that HuffPo occasionally, how should I put this,... exaggerates things, but, dayum! Hillary's laughing like she just had a big hit of some sticky kind and Bill is making faces at her! WTP?
I find it wonderful that there is a real possibility that the next POTUS could be a woman (waaaay past time for that bit of equality), but why does it have to be a corporate ass-kisser? The system being what it is, I don't suppose there's a chance of any other type being the front runner. So sad....