Conserve Is The Opposite Of Progress Updated 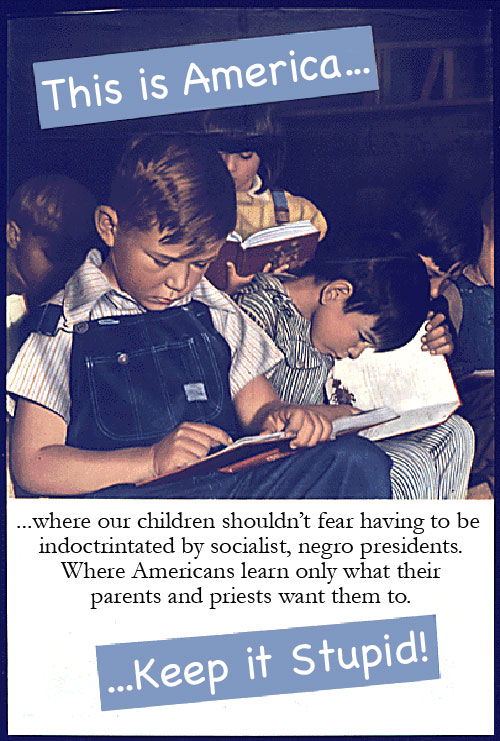 You should go read the post that goes with it. Cline explains things very well, indeed.

I may have missed it, though (because I'm still on my first pot of coffee of the day), but I don't think he went quite far enough in his explanation as to why Conservatives were so up in arms about their children being "indoctrinated" by the President's speech the other day. While he mentions the thread of anti-intellectualism that pervades the Republican party, he doesn't mention that it is a product of the Fundamentalist, literally-interpreted, Christianist religiousity.

These people know that if their children are exposed to the facts, they will draw their own conclusions and, in most cases, the children will come to see that what they have been told by their parents is ... disingenuous at best and delusional at worst. The Earth was not created in seven 24-hour days, homosexuals (and women and blacks and Hispanics and everybody else who isn't male, white, and Christian) aren't evil or lesser than, and they don't deserve preferential treatment simply because of the color of their skin or their brand of religion.

These Tea Baggers/Deathers/Birthers/Tenthers... ethno-religio-centrics know that once that happens, the Republican Party -- as it exists today -- will truly be dead. That is what really scares them. Not the Black Man in the White House, but the universal truths he represents by his very existence.

Update: This most excellent post by nonny mouse over at Crooks & Liars is a must read. Here's a sample:

Stupid people aren't leaders, they're not even followers. They're the Marching Morons. They're the Eloi to the Morlocks of Coulters, Rushes, Limbaughs, Savages, Hannitys, et. al., who cultivate and nurture their hordes of the slavishly stupid, then feed off them mercilessly. It’s the bread and butter for the Malkins who can claim millions – millions I tells ya! – turned up for the 9/12 marches, then used photos from the inauguration to fraudulently bolster the lie, fully aware her multitude of mindless minions will never bother to check – or ever realize it was all a lie, that a mere few thousand at most showed up, all that empty lawn speaking volumes.

Thanks for this post and the directive to JG's blog. Wow - so pathetically true.

Are we not sick to death of stupidity yet?

Yeah, I'm about fed up with compromising with liars and finding middle ground with idiots.

Bill McKibben, the environmental writer and founder of 350.org, said it best: these people are a very loud minority who won't be swayed from their lunatic perspectives by any amount of facts or truth; let's just move on without them and stop wasting our time and energy trying to get them on board.