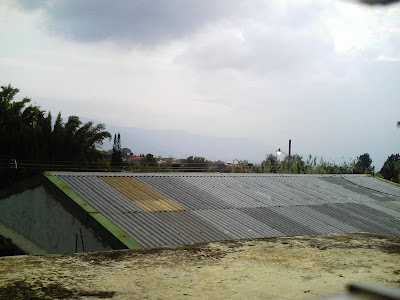 As Jen has already mentioned, today the rains came. And came. And, as of this writing, are still coming. She tells me that once the Rainy Season settles in, the daily torrent will mostly be confined to midafternoon (much like summer thunderstorm time in Teh Mountains, NC), but that here at the begininning, there's no telling how long it will rain.

So far it's been about six hours, and I have no problem with any of it. I've always enjoyed the sound of rain on a tin roof.

The power has flickered a couple times, which is something that, while I don't love it, I'm certainly used to it, having grown up in the penultimate house on a Rural Electric Authority line. There were times that it seemed like my Dad's sneezes (which, I must admit were prodigious -- not to mention that they echoed through the hills [I'm totally not kidding]) were enough to knock the power out back in the hills in the day.

Had dinner upstairs* with Jen and the girls, and a good time was had by all, with recorder serenades and (virtual) science inventions and more than a little giggling (although I did try to contain myself). And now I'm back downstairs, where it's much cooler, winding down and checking blogs and posting this.

Oh, by the way, if you haven't been by there this evening, stop by Steve's place, and leave some love for him and his family.

*for those who do not know, I'm living in the downstairs apartment of an up/down duplex, so as to allow everybody to grow used to the idea of me being here.
Labels: Costa Rica

What do you mean get used to you? Your a gem and if they don't love you already, there is something wrong with them! ;p

thanks for the love Brother
Right back at you and Jen