As I said the other day, we had a pretty severe thunderstorm blow through here. I mentioned a neighbor's truck that was unlucky enough to be in the path of a falling poplar tree, and that I had taken a photo that GIMP had eaten.

Well, I walked by that house again today, and apparently the insurance adjuster has not had a chance to stop by. The tree (actually two trees, the one in front is a pine) is still on the truck.

And so I took another photo: 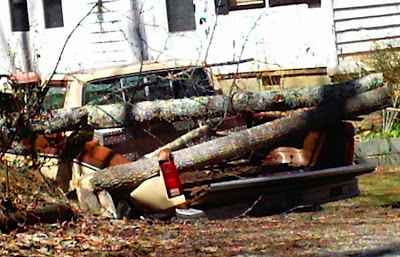 It looks pretty bad, but the damage appears to be confined to the bed, which is a fairly simple and not terribly expensive replacement. He's lucky the tree didn't fall on the cab, eh?
Labels: photos