As I have stated before, I do not yet have a digital camera, so previously I posted text descriptions of Puff and Callisto. Well, I borrowed my neighbor's camera the other day and took a couple of (bad) pictures of my faithful sidekicks. 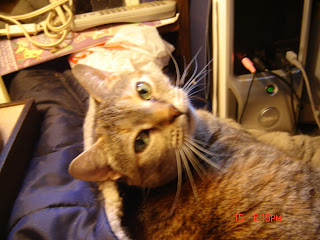 This is Puff, disturbed from her intense cogitation (aka 'sleep') and wondering what the hell I'm holding in front of my face. Note that she is curled up on the fleece vest I received as a Christmas present - which she immediately claimed as a bed. 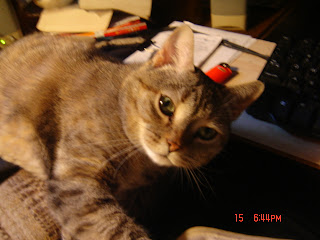 This is mere moments later. I call this the "You woke me up - I mean disturbed my cogitation - so now you have to love on me, God damn it!!!" pose. The paw reaching out of frame at the bottom is about to press insistently at my flesh, claws extended, until I succumb to her wishes. This is Callie. (I said the pics weren't very good - predominately dark kitty in a dimly lit camper after the sun has gone behind the mountain... but at least you can see her face!) She prefers the bed as her snoozy place. 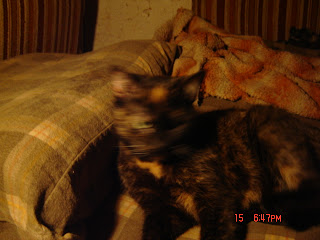 This was a (failed) attempt to move the light - I couldn't figure out how to make the flash work - and get a better picture of Callie. I failed. By the way, she doesn't really have a blurry head....

I shall attempt to become more proficient with digital cameras in the near future.
Labels: kittehs